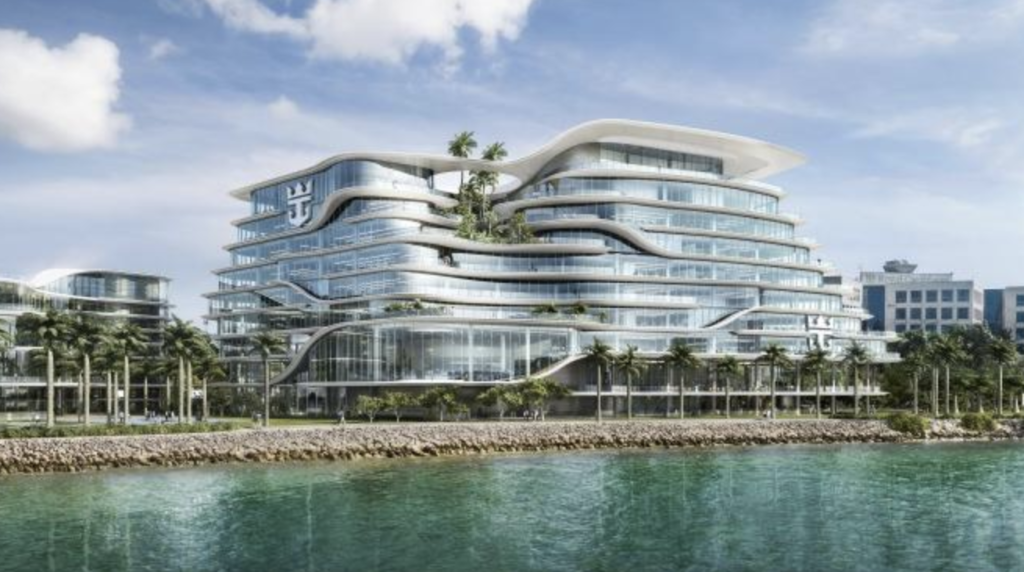 If you’ve ever been to the Royal Caribbean offices at Port Miami, you know there are 2 buildings on the campus.  What you might not know is that one of the buildings and its outer walkway area is in the shape of the company’s logo; a crown and an anchor.  An anchor is symbolic of stability and strength, and it has been part of the Royal Caribbean logo for decades.

In April, the Sun Sentinel reported that Royal Caribbean had plans for a new office at Port Miami.  The campus would double the employee capacity, increasing it from 2,200 to 4,200 employees. The deal has been approved by the Miami-Dade Tourism and Ports Committee with Miami-Dade County commissioners providing the final vote in May.

It’s emblematic of the tremendous growth the industry is enjoying.  Royal Caribbean is building and refitting ships, and there’s a long and diverse list of job openings in their corporate office; from highly skilled and technical to entry-level opportunities for someone looking to break into the industry.

The concept and design of their new office has clearly been thoughtful, careful and deliberate.  Estimated to cost $300 million, the 10-story, 350,000 square foot building will be in the shape of one of its cruise ships, with graceful curves a hallmark of the building’s exterior.  The roof will display a giant version of their crown logo so airline passengers can see it from the sky. The crown logo will also be visible from the side of the building.

The design concept takes both the environment and the employee into consideration.  With climate change and sea-level rise a concern for Miami-Dade, the building will be constructed 15 feet above sea level with storage for critical equipment on higher floors.  Included in the plan is a new parking garage with built-in electric car chargers, a green roof, photovoltaic cells, and rainwater collectors.  Renderings show that trees will rise from an opening in the center of the building.  Employees can look forward to plenty of green spaces, terraces, outdoor areas, a day care center, fitness center, cafeteria, an auditorium and a maritime innovation center for the design development and renovation of its ships.  Construction is scheduled to begin in June and completed some time during Q4 2020.  Major renovations are also planned for the existing 2 buildings leased by Royal Caribbean.

Like the anchor, Royal Caribbean’s stability and strength is evident, making their logo a perfect pick to represent this cruise giant.  We can’t wait to see the finished product.