The Cruise Industry Continues to Give Back

Charity is a big part of the Cruise Industry and Cruise Lines exist in a broader world which includes their home ports and the areas where their ships are deployed. It’s because of this reach that charity has long been a big part of the Cruise Industry. Cruise Lines are eager to work with local communities and give back to charities within these communities. All the cruise brands and their associations, including Cruise Lines International Association (CLIA) make contributions in a number of ways through their Charitable organizations and foundations as well as partnering with local charities. They give back through monetary donations, volunteer hours, charitable cruises, and even provide housing in affected areas during disaster relief efforts.

Norwegian Cruise Line Holdings Ltd., in partnership with All Hands Volunteers, set a goal to raise $2.5 million for the Hope Starts Here hurricane relief program. Their goal was to deliver an early relief response in the Florida Keys, and rebuild schools in the Caribbean islands after the destruction of Hurricanes Irma and Maria in 2017. Frank Del Rio, President and CEO of Norwegian Cruise Line Holdings Ltd. said “The Caribbean is part of our family, and we are grateful to work with All Hands Volunteers and Happy Hearts Fund to create the Hope Starts Here hurricane relief program and do our part in giving back to these destinations. We’re proud to start our campaign with a $600,000 donation to help begin the rebuilding efforts.”

Across the Atlantic is the MJM Group, a cruise interior outfitter, which raised £160,000 for local and national charities in 2018.  A mini-cruise and auction onboard an Azamara ship raised the funds for 3 key recipients; Cuan Mhuire, an all Island addiction treatment center; Pieta House, an all island treatment center for people who are suicidal or self-harming, and Mercy Ships, an international development organization that deploys hospital ships to some of the poorest countries in the world to perform life-changing surgeries.

Carnival Cruise Line has always supported the local South Florida Community with donations and fun activities. For thanksgiving in 2012, Carnival Cruise Line donated 137,500 meals to Feeding South Florida and had a 50-foot-tall inflatable turkey atop the Carnival Breeze for its inaugural sailing from Miami. Carnival Cruise Line continues to be creative in giving back to communities and now has Carnival’s AirShip debuting in Southern California. The 120-foot long AirShip is there to promote the Carnival Panorama debut out of Long Beach in December 2019. The AirShip showcased at the Rose Parade in January 2019 and will appear at other local events to create buzz about the new ship on social media. Carnival will make a $2 donation to St. Jude Children’s Research Hospital for pictures of the AirShip posted on social media with the hashtag #ChooseFun (up to a maximum donation of $20,000).

Charity cruises are one of the best ways to raise significant funds, and Princess Cruises did this in 2014. Their “Cruising for a Cause” event was able to raise $600,000 for a Veterans Charity. 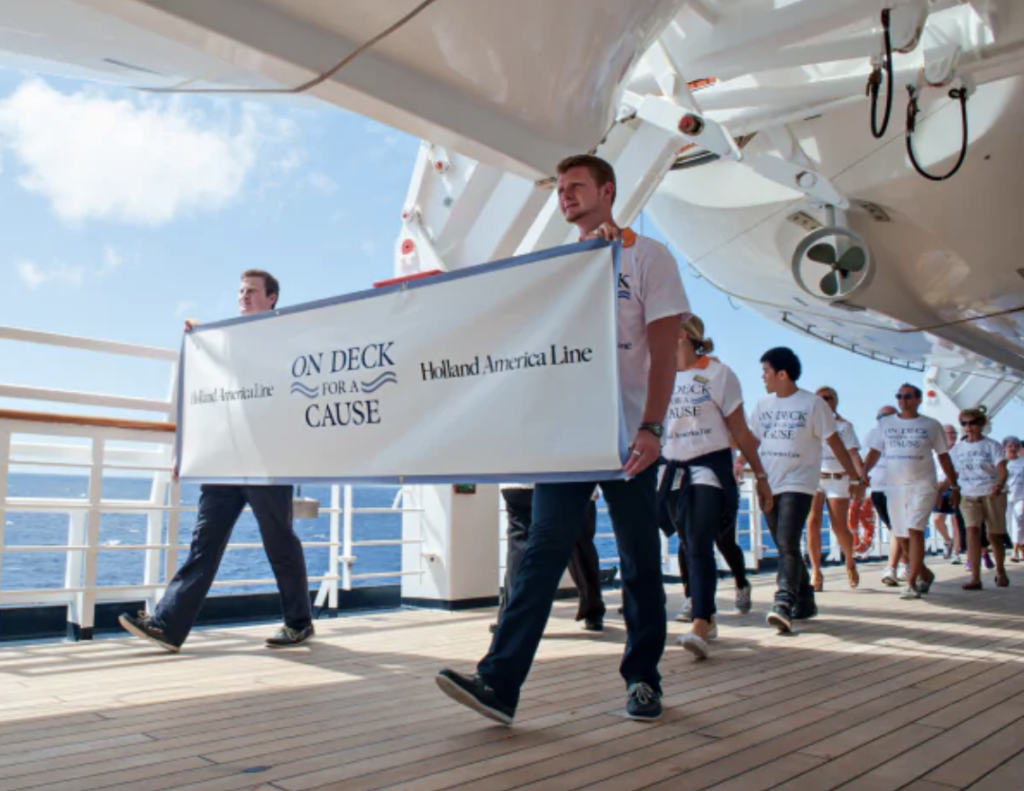 Giving back is a collaborative effort by the cruise lines, their employees, their charitable organizations and partners, and their guests!